4 Simple & Powerful Life Lessons from The Wizard of Oz

I can’t even count the number of times I’ve seen the classic 1939 movie The Wizard of Oz. It was always a childhood favorite that I made sure to watch whenever it was on TV. As I’ve watched it as an adult, I’ve come to realize that there are a number of simple but very powerful life lessons in the movie. Here are four biggies. 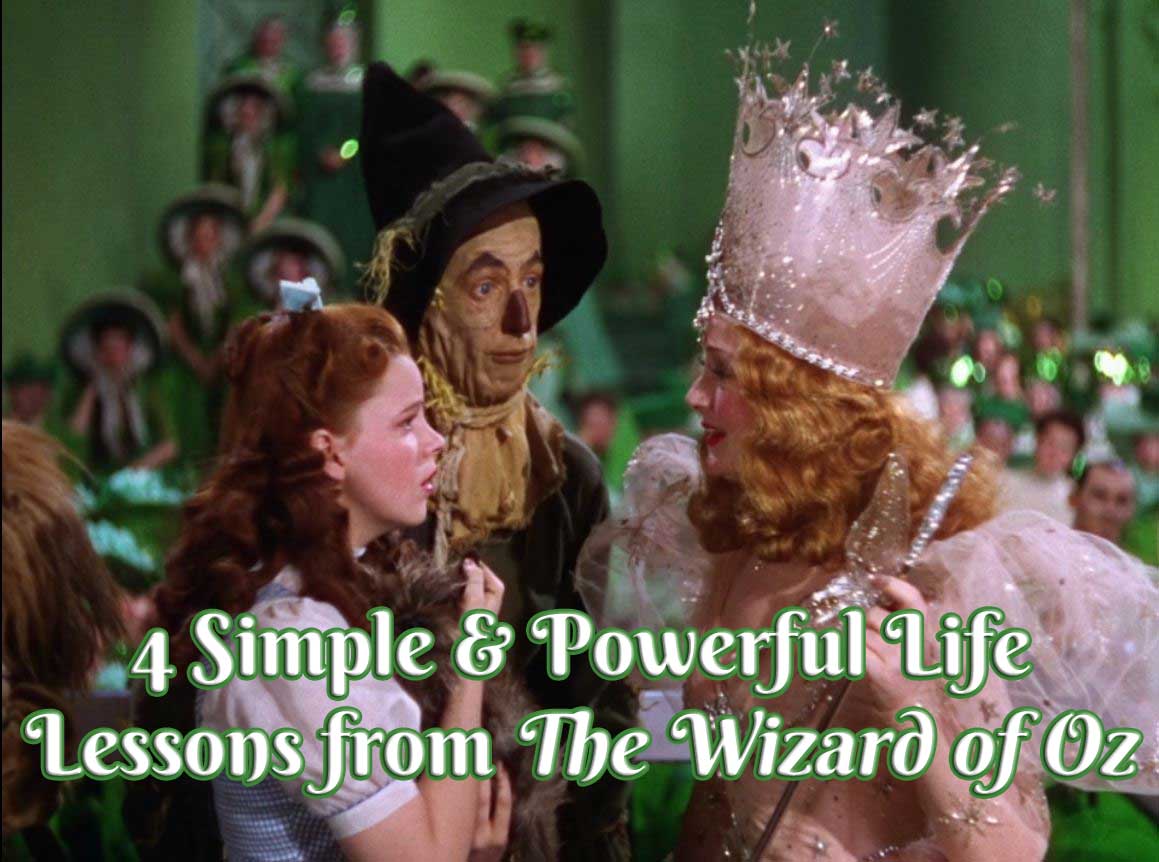 Life Lesson #1: Continuing to Do the Same Thing and Expecting Different Results Isn’t a Great Strategy

The movie starts off with a frantic Dorothy complaining to Auntie Em and Uncle Henry, and then Zeke, Hunk, and Hickory about mean, old Miss Gulch. But everyone is too busy to listen to Dorothy’s drama.

Finally Hunk, one of the farm hands, explains how Dorothy can easily resolve the issue. Just don’t walk by Miss Gulch’s place on her way home. Simple enough. If she stops walking by there, Toto won’t get into Miss Gulch’s garden or scare her cat. Problem solved!

Alas, Dorothy is so caught up in her own self-created crisis that she can’t see the simplicity of the solution.

your head about Miss Gulch. Think

you didn’t have any brains at all.

I have so got brains.

Well, why don’t you use them? When

Gulch’s place. Then Toto won’t get

in her garden, and you won’t get in

Life Lesson #2: Running Away From Your Problems Just Creates More Problems (AKA What You Resist, Persists)

After Miss Gulch takes Toto away to have him destroyed, he’s able to escape and return home. Dorothy decides they must run away in order to keep Toto safe. So she packs up a bag and they hit the road.

Shortly thereafter, she runs into kind-hearted Professor Marvel who quickly understands the situation and persuades Dorothy to head back home. While she’s on her way back, a nearby twister has everyone back at the farm rushing to safety. After unsuccessfully looking everywhere for Dorothy, they all finally head to safety in the storm cellar.

By the time Dorothy returns, she can’t find anyone and is unable to open the storm cellar. She seeks shelter in the house, but the wind is so strong that it blows out a window that hits Dorothy on the head, knocking her out cold.

Life Lesson #3: Giving Your Power Away to Others Doesn’t Solve Anything

The great and powerful Oz was neither great nor powerful, but he was a wise teacher.

Dorothy and everyone who joins her on her journey were all looking for something they already had – home, a brain, a heart, and courage. They just didn’t recognize it. So they gave their power away to the Wizard, hopeful he could give them what they felt they lacked.

Everyone already had what they were seeking within themselves. Scarecrow had the brains to come up with a plan to rescue Dorothy from the Wicked Witch. He also had the idea to bring the chandelier down on the Winkies so they could attempt an escape from the witch’s castle. 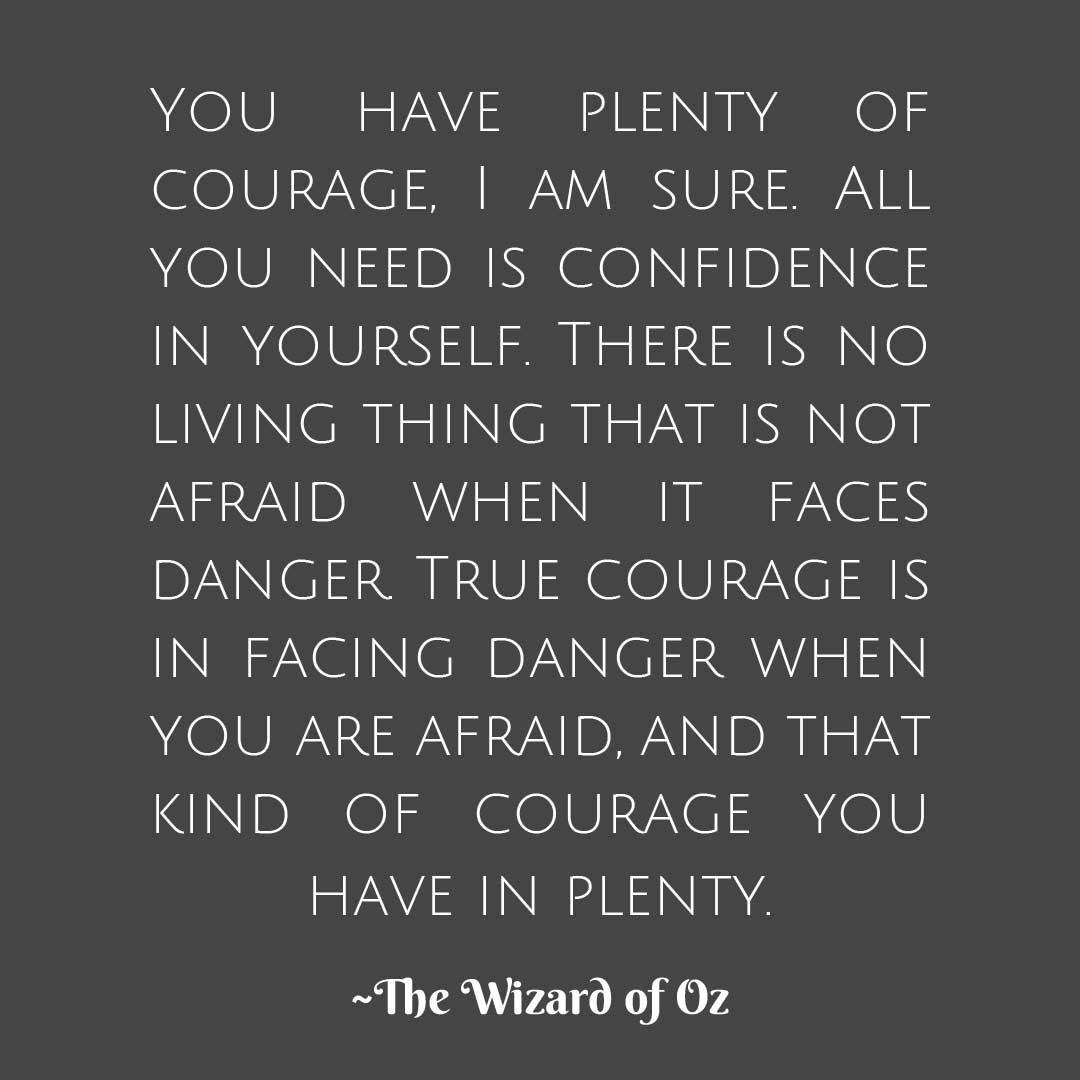 Tin Man had a heart. Perhaps not a physical heart, and he had the characteristics we think of when we say that someone has heart – emotion, affection, courage, and concern. He demonstrated this throughout the film in showing his love for Dorothy and in the tears he sheds when he worries about her.

The not-so-cowardly Lion had the courage to rush into the Wicked Witch’s castle, despite his fears, in order to save Dorothy.

Yet even after their successful mission to the Wicked Witch’s castle, they continued to argue for their limitations despite evidence to the contrary that they neither recognized nor acknowledged. They continued to seek what they already had from outside themselves.

The Wizard put it best when he said to the Lion, “You, my friend, are a victim of disorganized thinking. You are under the unfortunate impression that just because you run away you have no courage; you’re confusing courage with wisdom.” [emphasis mine]

Just because you believe something is missing in your life doesn’t mean really it is. Perhaps you just haven’t opened your awareness to the fact that it already exists within you.

In her final moments in Oz, Dorothy learns her most powerful life lesson – she always had the power to get back to Kansas on her own. She just had to learn it for herself, which she did as a direct result of her adventures.

The so-called “problems” in your life are really just opportunities for you to learn about, and experience, your power. Being told that you’re powerful can sound like a trite platitude unless you really understand that power through experience.

Your “somewhere over the rainbow” is right here, right now. Isn’t it time to acknowledge it?

NOTE: This post contains Amazon affiliate links. If you purchase anything through my links, you’ll pay the normal price and I will earn a small commission.