Duality Thinking…Are You Stuck in It? 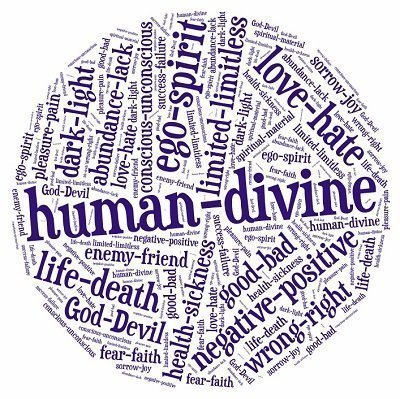 If you had asked me 12 months ago whether I believed in duality, I would have confidently said “nope, God is all there is.” As I’ve been going even deeper in my spiritual practice I’ve come to recognize just how pernicious dualistic thinking is. And yes, I had clearly been stuck in it.

Anytime we have a belief in two, in duality – whether good and evil, sickness and health, abundance and lack, human and divine – we create duality in our experience in the form of alternating between dis-ease and health in the physical body, “good things” versus “bad things” happening in the world around us.

As we move into the awareness and understanding that there is only one Mind, one Universal Intelligence, one Presence, one Power, we step out of living from our senses and belief systems. And as we continue to operate from a sense of two, we experience this duality through our sense and belief systems, along with everything on that continuum (i.e., great, good, less good, ok, less bad, bad, worse).

Is Your Concept of good Getting in the Way of Good?

When we have a belief that Good must look a certain way, we have divided it into good and bad. For every belief in so-called “good” there is a corresponding “bad.”

The fact remains that I am always living my divinity – either consciously or unconsciously – and when I’m living it unconsciously, when I’m believing in more than one Power, It will regularly “knock on my door” to remind me about the Truth of who I am and give me the opportunity to change course.

A belief in two powers will create the experience of two powers – whether good and evil, right and wrong, light and dark, sickness and health. The indwelling creative power within us respond to any beliefs in two powers, but there is no true Power to them other than the power we give them. When we’re stuck in dualistic thinking and beliefs, we are the ones who label whatever crosses our path “good” or “bad.”

If Good Is All There Is, There’s No Reality to Duality

The rise of Donald Trump on the American political scene is a great example of this. There are many who clearly label his rise to political prominence as a “good” thing, while a significant number of people see it as absolutely “bad.” If God/Good is all there is, and everyone and everything around us is an expression of Good, then that applies to Donald Trump (and every other politician in the field).

Everyone and everything serves its purpose in the expression of Good. That can be a tough pill to swallow for some, and it’s a powerful realization when we can live from that knowing. If Good is the only thing that’s happening, then I don’t have to worry about forcing change or “fixing” things. That’s not to say we don’t take action, we just take action based on inspiration rather than fear that something other than Good is going on. 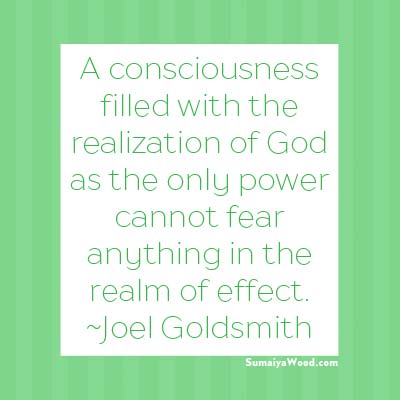 When we live from that recognition, awareness, understanding, and knowing, our experience of life shifts because we’ve moved beyond duality, beyond “good” and “bad,” to living from, and consciously acknowledging, Good in all ways.

I’ve started to shift my perspective to thinking and knowing (some days more successfully than others!) that if something is happening in the world around me, then it MUST be God/Good expressing in some way, shape or form. If something is showing up in my experience, then there must be Good in there somewhere, even if, at the human belief level, it doesn’t look that way, even if I have to dig to find it.

If we surrender the belief in duality of any kind, the appearances of bad, evil, dark, limitation, etc., fall away because the only power that sustains them is our belief in them. That’s not to say that things we might currently label as “negative” or “bad” won’t happen; we’ll just recognize them as happenings in the infinity of Good, showing up in our experience.

I believe that this is the true meaning of the “fall” in Eden. Eating from the Tree of the Knowledge of Good and Evil symbolized the belief in duality, the belief that we could somehow be separate and apart from God, the belief that there are other powers acting in direct opposition to the Good of God. When we live from a (false) knowledge of good and evil, we’re separating ourselves from the Truth of who we are, specifically our Divine nature.

“Every sense of limitation, every sense of discord, every negative trait of character is nothing more than an erroneous sense that’s gripping us. The very moment we realize one power and the non-power of this mesmeric sense, a freedom takes place, and you’re the same person you were, only now you’re free.”
~Joel Goldsmith

So if you’re experiencing any sense of limitation in your life, believing in the power of “bad things,” I invite you to explore any beliefs that there is something separate and apart from the Allness of God/Good.

It’s Easy to Fall Into the Trap of Duality Thinking

I used to fight with my ego, fight to transcend it because that is what I learned in other teachings I had studied. And doing so put me at war with myself. I was constantly “shoulding” on myself for the ways in which I fell short of my spiritual ideal. As my awareness has evolved, I came to realize that I was stuck in another form of duality, separating Spirit and Ego as two things when, in fact, Spirit or Consciousness and Ego are really just different names or labels for the same thing.

Even when I think of God and man, I am thinking in terms of duality. As I started to work with this idea in my own spiritual practice, I started to realize just how pernicious the theme of duality ran in my awareness, even though I regularly professed that God is all there is. Whether it was labeling things good and bad (or if I was really standing in a place of perceived separation, good and evil), abundance and lack, right and wrong, health and sickness or dis-ease, friend and enemy, whenever I am thinking in terms of two, of pairs of opposites, I am living in duality.

I’ve come to realize that spiritual practice really boils down to acknowledging who I am being at any given point in time. My answer to that question determines my experience of life. Am I Sumaiya the personality, masking her divine nature, or am I “the I that is Mind,” acknowledging that the one Mind – the only Mind there is – is my Mind? Am I living consciously aware of my divinity or am I living my divinity unconsciously?

If my answer to the question “who am I being” is “Sumaiya the personality,” then I am at choice. Do I want to continue living from limitation, steeped in duality, or do I want to go back to consciously acknowledging my oneness? Because the reality is that we’re always living oneness whether we’re conscious of it or not.

To be honest, sometimes my answer is “I want to stay in this space of living in perceived separation” – I want to be angry or upset or sad or whatever it is that I’m feeling in the moment. The key is that I don’t beat myself up about it. I’m doing it consciously, aware of what I’m believing in that moment, and honoring whatever feelings are coming up. So instead of denying the feelings because they’re “not spiritual,” which is also known as spiritual bypass, I let them run their course so I can release them and get back to living consciously “the I that is Mind.”

As I’ve gone deeper with my own spiritual study and practice, I’ve started defining it as degrees of awareness or understanding. How am I viewing what’s going on around or within me. Am I looking at it from the perspective of two, of duality, or am I consciously remembering that there are never two things going on, that God is all there is.

Whenever I’m troubled by the world of appearances, I can be sure I’m believing there is something separate from Spirit, that I’m living my humanity separate from my divinity, rather than recognizing my Oneness with all that crosses my path. If I can consciously remember that “there’s more to me than this appearance,” then I create space for a deeper awareness of Truth to be revealed in my experience.

“There is nothing either good or bad, but thinking makes it so.”

The practice here is to consciously recognize that there is no Power behind or within any limiting appearances or conditions in your experience. Good simply is. There are never two things going on, no matter what the appearance. Do you find yourself thinking of health as the absence of disease or the presence of vitality? Abundance as the absence of lack or the presence of bounty?

As long as you believe that there are two things going on – whether sickness or health, abundance or lack, peace or war, harmony or discord – you will always experience duality in some form. From that I want to point out that you can never get it wrong, primarily because there is no wrong to be had. Life will teach you everything you need to know, and you will approach whatever comes up from your own level of awareness at any given point in time. If you’re ready for a new experience of Life, it’s time to get back to basics – the continual acknowledgment of God/Good (without opposite) in ALL ways!