Is it a Problem? Or Just the Spiritual Solution Knocking at Your Door? 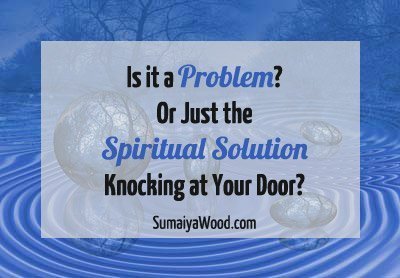 Problem or Solution? It’s all a matter of perspective

I have a fundamental belief that everything in my life is happening for me, for my benefit, and not to me, which makes me a victim of the world of appearances. This belief automatically takes me out of victim mode and puts me in the seat of power as I become the beneficiary of whatever is occurring.

So if something that seems “bad” is happening in my experience, or there’s a “problem” I’m dealing with, then I believe there must be a gift for me somewhere in the experience, and it’s up to me to uncover it.

As soon as I consciously recognize that’s why it’s here, I start to get out of my own way – I stop resisting the problem, I stop trying to force things to happen to change the situation. Usually when I’m trying to force things to happen, it’s driven by fear. Typically it’s due to one of the following – either I think I can’t get my good (because I’m somehow separate from it), or I believe my good isn’t coming to me fast enough (which is really just a variation on the belief that I’m separate from it).

When that happens, I’ve temporarily forgotten that everything in my life is Spirit expressing in form. And as I recognize that that’s the only thing that’s happening – a belief, or point of view, that I’m somehow separate from my good – then I am at choice. Do I want to hold on to that belief, or am I ready to try something else on for size.

To that end, I’ve consciously started to reframe how I think about problems. My trusty Merriam-Webster dictionary defines “problem” as “something that is difficult to deal with” or “something that is a source of trouble, worry, etc.” Definitely not fun! So instead of looking at (and dreading) problems, I’ve been shifting my perspective.

I realize that the identification of a “problem” really just creates the foundation for the spiritual solution – it’s a puzzle to be solved rather than a challenge to be vexed by. And the solution is to my benefit (even if I don’t yet realize how). So the conscious reframe that I’ve been working with is that a problem is really just the solution knocking at my door.

I have to open the door before I can connect with the solution. And it’s up to me to act as the midwife in the birthing of that solution. Otherwise it wouldn’t have shown up at my door.

What I’ve learned is that the solution will reveal itself through me. The problem is the solution’s way of making itself known, kind of like a wake-up call so I pay attention. The solution is Infinity (Spirit, Being, Infinite Intelligence, Mind – whatever you want to call it) revealing Itself in a new way. And as I remember that, I start to trust that the solution already knows the steps to its own revelation. All I need to do is pay attention to the guidance, insights and intuition I receive, and trust and follow through on whatever comes up. It’s almost like the solution is whispering those steps into my ear.

It’s not what you look at, it’s what you see

Early last summer I started to feel a bit stuck with my own spiritual practice. The tools I had been using weren’t resonating as they once had, and I decided that I was ready to go even deeper with my practice. As part of that process, I set the intention to find a new spiritual practitioner to work with.

While my intention was firm, I didn’t cling to it. I held it very gently, sometimes so gently that I occasionally forgot about it! There was never any doubt that I would find the right person; I trusted that I was already one with whomever was the best person for me to connect with. And I didn’t treat the situation as something that needed to be “fixed,” which just would have kept me separate from the solution.

I wasn’t trying to change something; rather, I just wanted to allow whatever was ready to be known through me that was showing up as a lack of connection with my spiritual practice.

By the end of October I found the perfect person for me to work with. The steps that led me to this person, on their surface, seemed to have absolutely nothing to do with my connecting with a spiritual practitioner. As I intuited the need to take certain steps, which came in the form of a deep, inner conviction that I needed to complete each one, I followed through.

Unbeknownst to me at the time, each step – which included taking an online course in something completely unrelated to spiritual practice; attending a one-day conference that, again, was not spiritual in nature, and spending the night after that conference in a nearby city when I could have easily driven the two-ish hours home that evening – led me closer to meeting the person I was to work with.

It wasn’t until I connected with this person that I realized the circuitous path that had led to my connecting with him. And there is no way I ever would have met him had I not listened to my inner guidance and taken the steps that, to be honest, didn’t always make rational sense. If I had doubted the guidance and failed to follow through, I would have missed out on the connection.

As I was taking each step, I wasn’t thinking about where it was going to lead – I honestly had no idea, and couldn’t have dreamed that some of the steps were leading me to connect with a new practitioner. I was just clear that the guidance was coming through very strongly, so I didn’t question it. It was a powerful knowing. I didn’t stop to question why, even though some of the steps made absolutely no sense at the time.

When I get the guidance to do something, the way I discern if it’s really something for me to do is I go within to get at the root of where the information is coming from – is it a knowing that the steps are mine to take, or is it more of a question – “should I or shouldn’t I?” If it’s the latter, I dig deeper to understand what’s behind the doubt. Do I believe I’m getting the guidance from somewhere other than my inner divinity? Is fear that my good is somehow going to slip away if I don’t make something happen driving me? If you ask yourself these same questions – and answer honestly – you’ll know.

So if you’re experiencing the appearance of a problem in your life, I invite you to start to recognize that it’s just the solution trying to make itself known to you. The solution is ready to be revealed – through you – or it wouldn’t have shown up as your “problem” in the first place. The solution, itself, will guide your steps, and as long as you’re listening for that guidance, which will come as insight and inspiration for action, and are willing to act upon it, you will create the conditions that allow the solution to make itself known.

wpDiscuz
0
0
Would love your thoughts, please share below.x
()
x
| Reply
We use cookies to offer you a better browsing experience, analyze site traffic, personalize content, and enable social media features. By closing this banner, scrolling this page, clicking a link or continuing to browse this site, you confirm your consent to our Privacy and Cookies Policy.Got It!Read more