Positive Affirmations Not Working For You? Here’s Why…

Have positive affirmations stopped working for you? Or maybe they never actually did work for you and you think the whole idea is nonsense.

Well, here’s the thing about positive affirmations. It’s not about the words you think or speak, but the understanding behind the words. Mindlessly repeating “I have abundance” or “everything I seek is now seeking me” won’t get you very far. The Bible specifically cautions against “vain repetitions” (Matthew 6:7). Is that what your affirmations have become?

Are You Affirming One Minute Then Denying the Next?

One habit that can keep affirmations from working for you is if you’re affirming your good in one breath, and denying it the next. That can happen if you don’t fully believe the affirmations you’re making, or if one day you believe and the next day you’re in doubt.

Maybe in the midst of your affirmations you start wondering how your good is going to show up. Or you might constantly be looking for whatever good it is that you’re affirming, wondering why it hasn’t shown up yet. That, my friend, is a denial not an affirmation!

When you start looking for your good, that’s an automatic indication that you don’t believe you have it (otherwise you wouldn’t be looking, you’d recognize that it’s already yours and nothing can separate or withhold it from you), which is in direct contradiction to the affirmations you’ve been making. If you find yourself doubting, try this affirmative prayer for peace to bring you back to center.

Positive Affirmations Aren’t About the Words, They’re About What You Understand 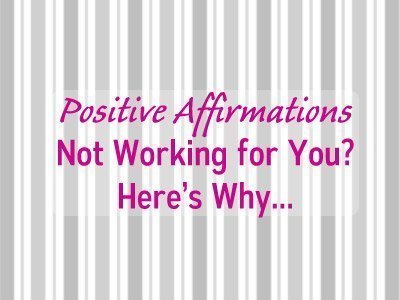 The key to using positive affirmations successfully is to really understand the spiritual meaning behind the words you’re saying. So if your affirmation is “I have abundance,” for example, think about what that sentence really means. Why do you have abundance? It’s because we live in an abundant universe. Infinity, aka God, is continually giving evidence of Its infinitude. The Bible reminds us that “it is the Father’s good pleasure to give you the kingdom.”

So how does that relate to money and abundance? I recently asked my Self this question: What is money?

The answer I “heard” is that “money is evidence of God’s sustaining Love.” Divine Love is unfailing Omnipresence, the unbroken continuity of Omniaction. It can never be absent or inactive. And if I’m thinking that it is, therein lies the source of my apparent problem — I’m believing that there is something going on outside of God.

In Reality, there can’t be anything to oppose my abundance because there’s no thing outside of God’s Allness, which is the Love that sustains me (not a fluctuating, conditional love that comes and goes).

The I AM that I am — the Self-Conscious Awareness that is giving evidence of Itself as me — lacks nothing. That Truth is true now. The consciousness that I am is God’s conscious Awareness of Itself, God giving evidence of the Wholeness of Its infinitude. If I think I’m somehow separate from It, rather than acknowledging that I am It, my experience is one of limitation because I”m denying the Allness and Wholeness of my Being.

Remember, you are not something separate and apart from the Allness of God trying to “connect with” or experience God/Good outside of yourself. You’re not creating anything with your affirmations that doesn’t already exist. Infinity is complete now, and that completeness includes whatever it is you seem to be seeking.

Are Limiting Beliefs Holding You Back?

Also pay attention to your limiting beliefs. You know you have them if the voices in your head are scoffing at the affirmations you’re saying. So sticking with the “I have abundance” example, if you repeat that and the voice in your head laughs and says “yeah, right – if I have abundance, where is it?” then you know you have a limiting belief somewhere that needs to be cleaned up.

Instead of brushing that limiting belief aside and pretending it’s not there, pay attention to it. Start a conversation with it . Find out why it’s there and understand what’s behind the belief. That’s the only way you’ll be able to fully release it once and for all – avoiding it or pretending it doesn’t exist won’t get you there. (I know, I’ve tried. It definitely doesn’t work!)

So, for example, if the voice in my head is saying “where is this abundance if you already have it,” then probe deeper to find out what the underlying belief is behind that. Do you believe there is a power separate and apart from Spirit that’s blocking your abundance? Do you believe you’re somehow unworthy or undeserving of your abundance? Is there something else going on? The voices in your head are a signal that there’s something to look at — a belief in duality of some sort that’s ready to be expunged.

So while working with positive affirmations is a great way to bring yourself into alignment with all the good that is already yours, it’s also a wonderful way to identify and release those limiting beliefs that are holding you back.

Just remember, it’s not about the exact words you use – it’s the understanding that is the key. When you understand why the Truth you’re  affirming is actually true, your experience of Life can’t help but shift.