Tapping Into Your Spiritual Wisdom: How To Know What Voice You’re Hearing 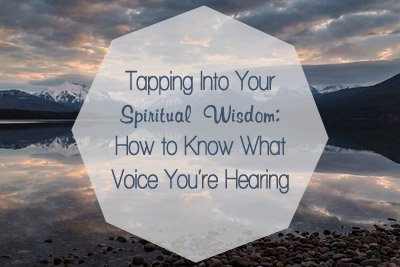 Some people call it listening to your gut, others intuition, divine guidance, spiritual wisdom, or inner wisdom/inner guidance. It’s that still, small voice within that often guides and directs us, if we’re willing to take the time to listen. I often get asked about my process for “checking in,” the term I use for tapping into my intuition, spiritual wisdom or divine guidance, what I call my inner Divinity, which is really just Omniscience revealing Itself as my awareness. Specifically, people wanted to know how I knew where the information was coming from. They were concerned that their own insights were coming from the “dreaded ego.”

I wasn’t quite sure how to respond when I first started getting asked that question. I didn’t really have a process that I was consciously aware of, I just knew the answers I was sensing were right.

Ultimately I realized that when I’m listening to my inner wisdom, there’s not a belief behind the answers I’m receiving. I’m not trying to be “right,” I’m not trying to choose one fork in the road over another.

I’m just listening without judgment, without trying to force the answer to be one specific thing. If I sense there’s a belief that the answer should be one way over another, I don’t trust the information. I try to set it aside until I am truly allowing a clear insight to come through.

I’ll share an example from my own experience a couple of years ago. One morning I woke up and was craving breakfast from my favorite neighborhood breakfast place. Even though we had the ingredients to make a hearty breakfast at home, I didn’t feel like cooking.

I checked in, my process of going within to listen to my inner wisdom. Sometimes it comes in the form of hearing specific instructions, sometimes it’s just a knowing. And this particular morning I received very clear guidance that it was not in my best and highest good to go out for breakfast that morning. Disappointed, I double and triple-checked to make sure I had heard correctly!

Unfortunately for me, I had. I say unfortunately, because I REALLY didn’t feel like cooking. And I heard very clearly that I was supposed to go for breakfast the next day. I just clearly heard “tomorrow,” with no further explanation,  So I cooked the breakfast I was hoping to have served to me, and while it was good, it definitely wasn’t as yummy as what I would have gotten had I gone out for breakfast. Sometimes surrender can be challenging!

The next morning I woke up and double checked if it was still in my best and highest good to go for breakfast. I was glad to see that it was. And there was further clarification to get there at 9am. I made a joke to myself about my inner wisdom being so bossy and then proceeded as instructed.

As I walked in a couple of minutes after 9, I noticed an acquaintance who was also there for breakfast. I was surprised to see her there because she didn’t live in the neighborhood. We ended up sitting at separate tables next to each other as I had mistakenly assumed she was meeting someone there.

After a while we started talking and she told me that it was her birthday and she had been driving around looking for a place to have breakfast. The first two places she tried were closed, and then she came upon the restaurant where we ultimately met up. It was her first time there.

Over the course of our conversation, she mentioned that she had lots moving, and I offered to pray with her in the middle of the crowded restaurant. That’s when I realized why I was supposed to be there on that day at that time. Oftentimes these insights can come cryptically, without a clear understanding of how or why. And it’s important to trust guidance when it comes, to be willing to surrender to it, even if you don’t understand it.

Is There a Belief Behind the Guidance?

Another example of this happened to me just the other day. As I was getting my vitamins one morning, I had a sense of knowing that one of my clients was low on her Vitamin D levels. It didn’t make sense, so I just ignored it. I did know that this client in question was experiencing some health challenges and I thought that perhaps my “left brain” was trying to get in on the game with a belief that Vitamin D could help her. So I let it go.

After continuing to receive that “hit” several more times over the next few hours, I finally decided to email her with the info I was receiving and suggested she ask her doctor to test her Vitamin D levels. Her response was “Interesting! I usually do take D but ran out a month or so ago. I’m going to add it back in today.” Now she and I had never discussed which vitamins she was supplementing, so I had no idea that Vitamin D was something she was taking. And I definitely didn’t know that she had run out and stopped taking it. When the same information illogically kept coming through, and I was clear I didn’t have a belief behind it, I passed it on in case it was helpful.

How to Know You’re Connecting With Your Spiritual Wisdom

If you’d like to start consciously connecting with your spiritual wisdom, just take a moment to get still. When you’re ready, develop your question and go within to receive the answer. Just be with whatever comes up. And check in with yourself on the following:

Ultimately, it’s practice that will be most helpful in determining if the information and insights you’re sensing are coming from your brain/ego/personal sense or your spiritual wisdom/inner Divinity (which I believe are really the same thing, just operating at different levels of awareness and understanding — a topic for another post). Practice and keep track of the insights that come up. Make note of any sensations present in your body as you receive answers to your questions (for example, a “yes” feels different in my body compared to a “no”).

Let me know how you’re doing with your practice, or ask any questions you might have in the comments below. I’ll do my best to answer them and provide additional suggestions.

wpDiscuz
0
0
Would love your thoughts, please share below.x
()
x
| Reply
We use cookies to offer you a better browsing experience, analyze site traffic, personalize content, and enable social media features. By closing this banner, scrolling this page, clicking a link or continuing to browse this site, you confirm your consent to our Privacy and Cookies Policy.Got It!Read more